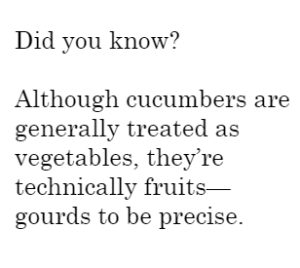 With summer upon us and temperatures reaching the triple digits in Southern California, everyone is trying to keep cool as a cucumber. But what does cucumber do for us other than look pretty in our drinks? Below are some reasons to celebrate National Cucumber Day by eating some of nature’s most hydrating fruit!

What A Cucumber Can do for You 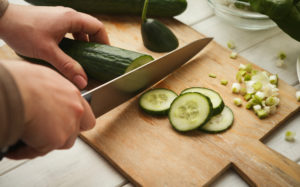 With cucumbers being 95.2% water, they’re great for keeping you hydrated after a workout, during the hotter months, and all year round!

One cup of cucumbers contains 22% of your daily recommended amount of vitamin K. This vitamin is used to produce prothrombin, which is a protein necessary for bone metabolism and blood clotting.

That same single cup of cucumbers would also provide 12% of your daily recommended amount of molybdenum, an essential mineral that converts to a molybdenum cofactor, which activates four essential enzymes.

4. May help with inflammation

Cucumbers contain cucurbitacin, a class of biochemical compounds that, according to this study, have been found to “…possess pharmacological effectiveness against inflammation, cancer, artherosclerosis and diabetes.”

One cup of cucumber contains 152 mg of potassium. Potassium has been found to help lower blood pressure. Also, according to this study, “Higher dietary potassium intake is associated with lower rates of stroke and might also reduce the risk of [coronary heart disease] and total [cardiovascular disease].”

There is some research suggesting cucumbers (and many other plant-based foods) may not be as good for the body as originally thought due to the lectins they contain. The study suggests that they found a link between lectins and memory decline. But according to Healthline, processes such as cooking and fermentation can make the lectin-containing food safer for consumption. On top of that, cucumbers aren’t even the biggest offender when it comes to lectin content.

To learn more about what all these vitamins and minerals can do for you, speak to one of our doctors during an appointment or call us at (888) 824-5580!