Food poisoning is the result of an infection often caused by consuming foods containing harmful bacteria, such as parasites and viruses most commonly found in raw chicken, meat, eggs, and fish. According to the CDC, in the United States, “48 million people get sick from a foodborne illness, 128,000 are hospitalized, and 3,000 die,” each year. At this point, more than 250 foodborne diseases have been identified, the most common being Norovirus, Salmonella, Clostridium perfringens, Campylobacter, and Staphylococcus aureus. 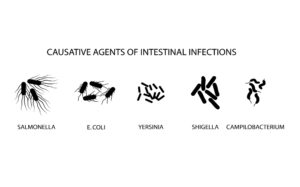 Some of the symptoms of food poisoning can include:

Diarrhea can lead to dehydration. Some signs of dehydration include having a dry mouth, feeling lightheaded, and passing small amounts of dark colored urine.

How to Prevent Food Poisoning

When to see a Doctor

Most cases of foodborne illnesses will pass without any medical treatment, but you should seek immediate medical attention if you display symptoms such as:

If you are suffering chronic gastrointestinal issues, Healthpointe is here to help. Schedule an appointment today to speak to a doctor.